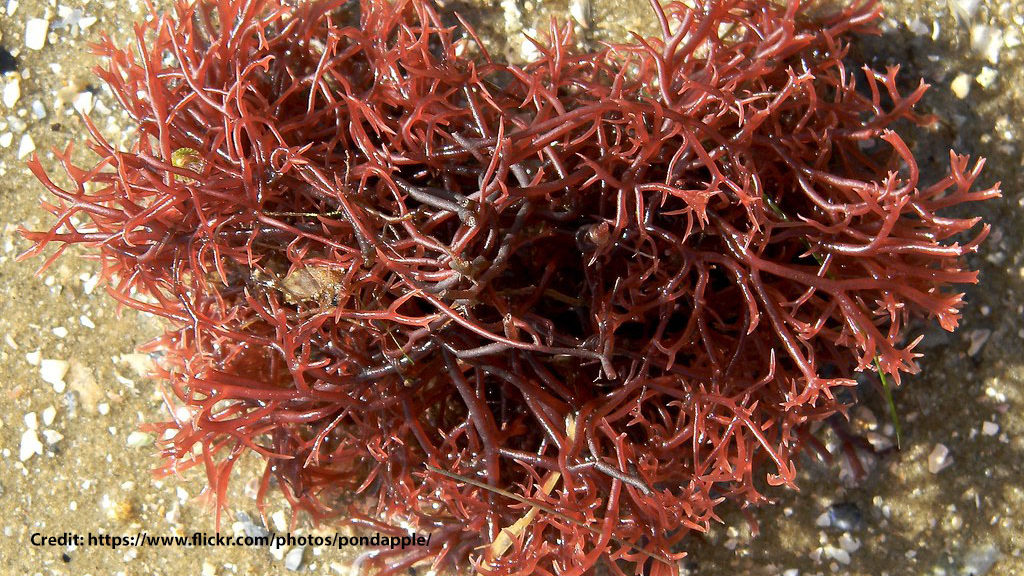 Gracilaria is a type of red algae notable for its economic importance as an agarophyte, as well as its use as a food for humans and various species of shellfish. An agarophyte is a seaweed, typically a red algae, that produces the hydrocolloid agar in its cell walls.

This Gracilaria can be harvested commercially for use in biological experiments and culturing. Various species within the genus are cultivated in Asian, South American, African countries and in some parts of Oceania as well. In these countries, the harvesting of agarophytes, either as natural stocks or a cultivated crop, is of considerable economic importance. (1)

The principal product of Glacilaria is agar. It is also called as agar-agar .It used in industries for Industrial applications are of three quality grades of agar: sugar reactive, standard, and food grade.

In the sugar reactive agar, the gels are stronger because of high sugar concentration. It is obtained largely from Gracilariopsis lemaneiformis, at present the most important species under cultivation in China.

Standard agar can be used to make gel that has the temperature, consistency and structure for microbiological purposes. It is produced largely by other seaweed groups such as Gelidium, Pterocladia or Pterocladiella.

The food grade agar-agar is a type of agar not meeting the requirements for sugar-reactive or bacteriological agar. It is extracted from a wide variety of Gracilaria species. (2)

During the agar extraction process from Gracilaria or Gracilariopsis, considerable amounts of solid residues are produced as extraction wastes. The potential for using agar extraction residues as raw materials for pulping and paper making has been explored in China mainly. It has been found that the extraction wastes could be utilized for papermaking. For instance, they can be either used as a fiber source or as a functional filter.

According to researchers in China, the higher contents of algal materials in the hand sheets samples resulted in lower permeability and stronger antimicrobial effects than the common paper. Moreover, algal material, when used as a partial substitute for wood pulp, resulted in improved paper density and antimicrobial effects. Similarly, they had better protection against water and grease. This indicates its potential use in the food packaging industry. This is extremely beneficial as it can help conserve environment as trees do not need to be cut down for making paper. (3)

The large carbohydrate contents Gracilaria is an indicator that it can be used for ethanol production. Researchers have recently demonstrated such possibility by using field cultivated Gracilaria edulis and fermenting its polysaccharides to ethanol. Another set of researchers have developed an efficient strategy for agar extraction using the resultant pulp for bioethanol production. They suggested an integrated biorefinery process as the kind of activity most likely to obtain maximum economic returns from Gracilaria.

Furthermore, they noticed that after ethanol production, the leftover residues still contained good amounts of organic matter and useful minerals. This means that the leftover Gracilaria can eventually be used as biofertilizer. (4)

Various studies have been conducted to determine the chemical composition of species of Gracilaria and on the effects of its many bioactive compounds. The studies have shown that a large variety of compounds and effects can be used as multi product source for biotechnological, nutraceutical and pharmaceutical applications. However, more investigations are required for separating, purifying and characterizing many of Gracilaria compounds. (5)

The capacity of seaweeds to remove inorganic nutrients from the water media has been recognized for many decades. Currently, integrated multi-trophic aquaculture, the species of seaweeds are viewed as renewable biological nutrients scrubbers that absorb nutrients. Various species of Gracilaria have been evaluated in their removal capacity of nutrients produced from invertebrate or fish farms. (6)

Gracilaria and other red algae has been associated with several health benefits. It has been shown to increase blood circulation, regulate blood sugar levels, and lower LDL/bad cholesterol. It has been documented to improve the overall immune system as well.

According to dieticians, Gracilaria is recommended for consumption for those, who have insulin resistance issues. (7)

After looking at the several uses and health benefits of Gracilaria, I think people and business should start to look at growing Gracilaria in ponds and aquatic culture. This will be very beneficial to marine industry as well as help alleviate the burden on paper industry. Also, this will help us conserve our motherland and make it a better home for our future generations.