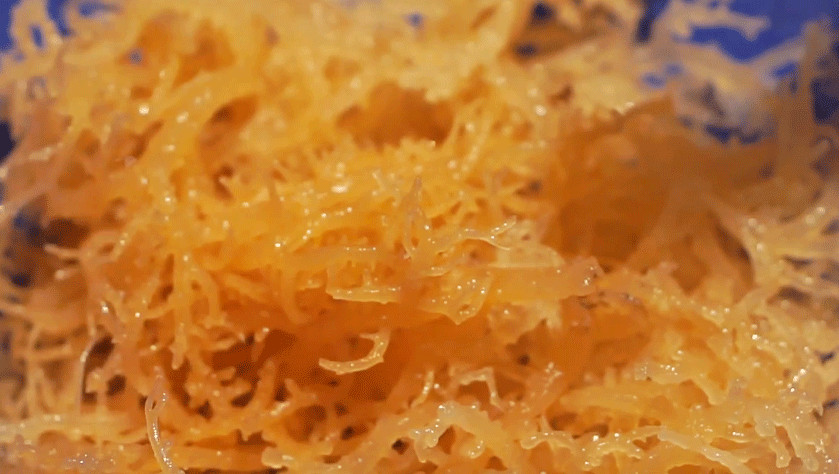 What is Irish Moss?

Irish Moss is also known as Carrageen Moss. It is a species of red algae or red seaweed, which grows along the rocky parts of the Atlantic coast of North America and Europe. Its color varies from greenish-yellow to red to a dark purple. It is a small alga with a length of 20 cm.

Use of Irish Moss In History:

Irish Moss was used as poverty food by the Irish in the 19th century, especially during the Irish Potato Famine. As a result, Irish Moss wasn’t considered as a desirable food item until much later. People associated Irish Moss with poverty and hardships of the time.

In terms of consumption, Irish Moss can be divided into the following types:

It has also been used as a home remedy for a sore throat and congestion in Venezuela.

Irish Moss consists of nearly 10% Protein and around 15% of the mineral content. It is believed that it contains 15 of the 18 elements that make up the human body.

Irish Moss is highly mineral rich and contains a high amount of Magnesium. Magnesium helps our body to absorb calcium more effectively, which helps in strengthening our bones.

Irish Moss is also rich in Iron. Iron helps build the hemoglobin in our red blood cells, which carry oxygen to our cells.

Irish Moss is also a good source of the B Vitamins. It contains a good amount of Vitamin B2 and Vitamin B9. Vitamin B2 helps break down fats and carbohydrates. Vitamin B9 helps make DNA and other genetic materials.

Irish Moss is also a good source of Proteins. 15% of its content is Protein. Irish Moss contains Proteins and Amino acids like Tryptophan, Lysine, Tyrosine, Proline, and Methionine.

Irish Moss is also rich in Carbohydrates. It contains good amounts of Dietary Fibres, Starch, and Sugars like Sucrose, Lactose, Fructose, and Maltose.

Irish Moss contains very low amounts of Fats. But, it is a good source of Fatty Acids like Omega-3 and Omega-6.

Irish Moss consists of nearly 10% Protein and around 15% of the mineral content. Irish Moss is highly nutritious. It is believed that it contains 15 of the 18 elements that make up the human body. Followings are the health benefits of Irish Moss.

In 2013, a scientific study confirmed that Irish Moss and some other blue-green algae can protect us against cardiovascular disease. The study showed that regular intake of algae improves blood lipid profiles and also prevents inflammation.

Irish Moss is rich in chlorophyll and Omega-3 fatty acids and other non-inflammatory compounds. Irish Moss contains a high protein content, which is a great source of active peptides.

Irish Moss contains an ample amount of Potassium. Therefore, adding the seaweed to any diet can relieve many symptoms of anger, irritability, depression and anxiety disorders.

Irish Moss is rich in Iodine and Selenium. Both of these compounds help in the production of Hormones. Thus, Irish Moss helps avoid a lot of Thyroid related problems.

HPV is the most common sexually transmitted infection in the U.S. The red algae in Irish Moss produces a gelling agent called carrageenan.

Recent studies have proved that this agent is able to block the transmission of HPV.

Irish Moss is very helpful for sore throats, coughs, and relieving congestion. It is also used as an anti-inflammatory and lung tonic for pneumonia and bronchitis.

Its high sulfur content and gel-like qualities make it a useful addition to a lot of cosmetic products. Homemade Irish Moss gel can be used as a face pack to nourish the skin.

It can also be consumed internally to benefit the skin.

Irish Moss helps accelerate recovery from injuries and strengthens tissues and muscles. It also helps reduce swelling and acts as an anti-inflammatory for knee and joint injuries.

Irish Moss can be consumed as an alternative to nuts, fats, and carbohydrates. Irish Moss provides a feeling of fullness that helps you control your urge to eat. It also boosts energy, which could prove helpful for those participating in physical workouts to lose weight.

Not sure which supplements you should try? Check these out, maybe you’ll find what you’re looking for!

In case, you want to make Irish Moss smoothie at home. It is an easy process. First, you need the Irish Moss, you can buy Irish moss from any local supermarket or from online (Amazon, eBay, Walmart). You have two options when it comes to buying Irish moss, either you can the organic Irish moss or the regular Irish moss.

Now, you got to prepare the Irish Moss. Soak it, rinse it, now, blend it with your favorite fresh fruits, dry fruits, chocolates, coconut milk, and whatever else you want to blend with, it is totally up to your imagination and creativity.

Irish Moss Gel and its Uses:

Irish Moss is also available in the gel form. Irish Moss gel can be used in a variety of ways, both for consumption and health care.

Irish Moss is also available in powder form! This way, you can easily add it to your food.

Here are some good powder choices for you:

Where To Buy Irish Moss?

The best place you can look for Irish Moss is probably the internet. You can find Irish Moss in whichever form you prefer, with just a few taps of the finger.

Personally, I’d recommend you to order through Amazon (amazon.com). It’s very easy to find, and most of the times, you can find great deals too!

Side Effects Of Irish Moss:

People taking medications for high blood pressure may experience some negative side effects after using Irish Moss. These side effects may include dizziness, lightheadedness, and syncope.

Other Possible Side Effects:

Other side effects that may occur are bleeding, abdominal cramps, diarrhea, and hypotension.

Thus, Irish Moss is beneficial for those fit to take it, and yet, dangerous for some.

Is Irish Moss bad for you?

No, Irish moss is not bad for anyone. But you should not take plenty of irish moss if you have not taken such nutrient rich source food before. The other thing that must be avoided is that people should buy organic Irish moss and prepare them carefully otherwise it contains elements that may not be good for you.

What are the benefits of Irish moss?

Where is Irish Moss from?

Irish moss is cultivated and harvested across the globe now for commercial gain. It was initially found and consumed in the Europe, now you can find Irish Moss no matter where you are in the World. The thing you should keep in mind when buying Irish Moss is you should buy naturally grown organic Irish Moss.

Can I eat raw Irish Moss?

It is not good idea to eat raw irish moss and any other raw seaweed. It must be cleaned and processed in order to get rid of unwanted elements from the ocean, that it carries. You should wash and rinse Irish moss and soak it in water for some time and simmer for up to 40-50 minutes and then strain it and rest the liquid to thicken to form gel. Now you can keep it in refrigerator and use for several days.

Recent studies show that irish moss may reduce blood pressure, but at the same time isih moss has potassium that is considered to be blood pressure friendly. If you are a blood sugar patient, please avoid such highly nutritive food source.