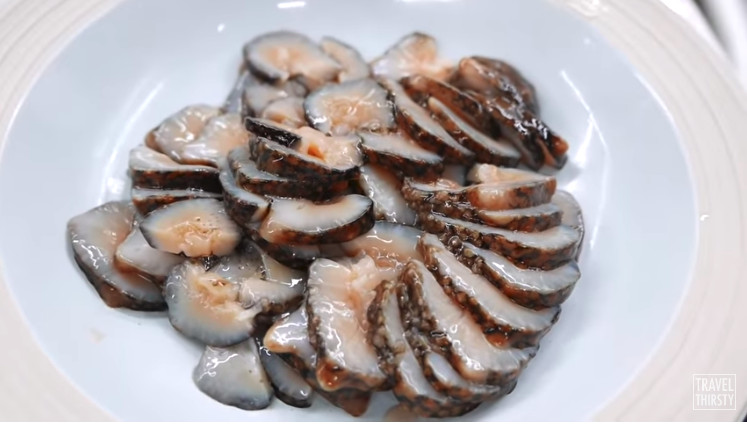 Sea cucumbers are not fruits-they are animals

Sea cucumbers are marine animals that have a leathery skin and elongated body.  It is named as sea cucumber from their resemblance to a popular fruit due to its worm-shaped structure. The sea cucumber is biologically termed as holothurians.

Sea cucumbers are found across the World but most commonly seen on Singapore shores. They belong to the class of Echinoderms that includes sea stars and sea urchins. These animals appear in many different color and sizes.

Sea cucumber is one of the most highly demanded seafood products in the market and their dried bodies are prized for their medicinal properties.

Sea cucumber can also slow up the aging process and helps in reducing inflammation. Also, some exponents say that the sea cucumber can fight against cancer.

Sea cucumbers have been used a food source and often fished from the Pacific ocean for over 170 years. These animals are used as either fresh or dried in different dishes. The dried sea cucumber is rehydrated and added with recipes like stew, soups, and stir-fries. Also, they can be eaten raw, fried, pickled or combined with flavor from ingredients like meat or other seafood.

Sea cucumbers are an excellent source of nutrients, very low in calories and high in fat and protein. They are the best weight-loss friendly food. They also contain many essential substances like antioxidants.

High protein foods such as sea cucumbers help for diabetes patients to control their blood sugar levels. As sea cucumber is rich in protein that benefits heart health, lower the blood pressure and improves the bone density.
Four ounces of sea cucumber contains

Using toothpaste that containing sea cucumber extract will help you to prevent from gum disease. When you use the sea cucumber toothpaste you can see some greater improvements in gum health like plaque buildup and bleeding.

Animal-based research shows that sea cucumber helps to keep the cholesterol in check. Also, a study reveals that they prevent atherosclerosis.

Many studies suggest that specific compounds found in sea cucumber may have cancer-fighting effects. This may be used in the treatment or preventing pancreatic cancer.

Sea cucumber contains substances called cytotoxins which are cruel to fight cancer cells. The presence of triterpene diglycosides in sea cucumber has a powerful effect on five types of cancer cells which includes breast cancer, prostate, and skin cancer cells.

Vitamin A is a powerful antioxidant that moves through the body and it affects every aspect of your health including heart and kidney function, brain health, proper skin, vision, and lungs. In addition, this can give a potential to boost your immune system.

Chondroitin Sulfate is one of a compound present in sea cucumbers. This can be found in the tissues between bone and cartilage which is an important building block in the skeletal structure of a human.

The marine vertebrates like sea cucumber are in demand for their medicinal benefits.

It is strongly believed that sea cucumber capsules stimulate the immune system and provides the essential nutrients to the body. They naturally improve the connective tissue, reduce inflammation and improve health.

The dog’s body naturally produces glucosamine which decreases and canine arthritis become a risk as it gets aged. So sea cucumber is a natural alternative in relieving joint pain and reducing inflammation.
Therefore, sea cucumbers are considered an ingredient in dog treatments and supplements for dogs.

Sea cucumber powder is a pure supplement of sea cucumber which is freeze-dried to obtain its active ingredients. They are most helpful for joint and muscle health. This powder is used to treat weakness, impotence, frequent urination and constipation due to intestinal dryness.

Sea cucumber powder is a made by natural processing which is non-gamma irradiated to preserve natural purity and effectiveness. This is an excellent product for people with chronic joint pain and sprains, ligament stress and arthritis.

The sea cucumber oil is named as Gamat and knowing their medicinal healing values, the Islanders started processing them to produce healing oils. They can heal both internal and external body disorders such as aches, ulcers, burns, and injuries.

When sea cucumber is used in pure form without adding any ingredients and boiled in a container for three days in low heat which is called as Ayer Gamat. This oil is used for internal healing like peptic ulcers, stomach aches and even for bleeding piles.

Sea cucumber extract is a kind of supplements that contain unique components like modified triterpene glycosides, lectins, peptides, sulfated polysaccharides, and esterified phospholipids. So these extracts are used an anti-microbial, anti-oxidant, anti-angiogenic, anti-inflammatory and anti-tumoral property.

Sea cucumbers are interesting marine water animal that has a number of medicinal uses. As they are a nutritious protein source it can be added to various dishes. Sea cucumbers are traditional seafood that may have still many health benefits but more research is needed to prove it.