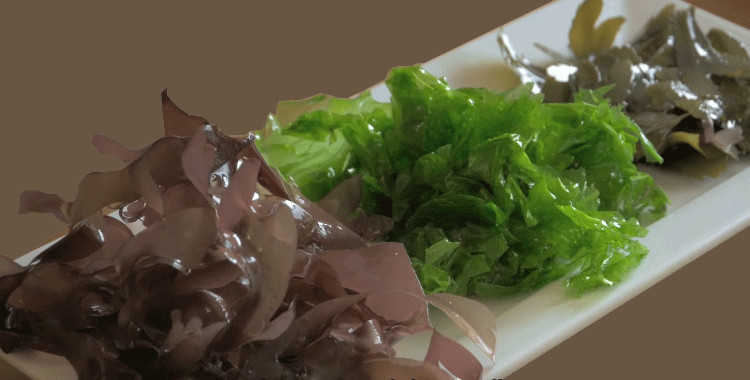 Edible seaweeds are algae that can be eaten or used in the preparation of food. There are more than 30 varieties of edible seaweeds that are used for cooking and eating. Each of these varieties is unique, but they all contain a rich amount of essential vitamins and minerals. These minerals include potassium, phosphorous, manganese, magnesium, iron, selenium, iodine, vanadium, calcium, zinc, molybdenum and copper. Various vitamins like vitamins B, A, E, C, and D. these nutrients help in maintaining good health and fighting off illness.

Edible seaweeds also have significant antiviral, anti-inflammatory, and cardiovascular benefits because they are rich in phytonutrients like sulfated polysaccharides. Over 100 studies done on the health benefits of edible seaweeds, when reviewed, revealed that seaweeds may be a better source of bioactive peptides than even milk products. Therefore, edible seaweeds are useful in promoting heart health and lowering blood pressure. Research also shows that seaweeds may protect us from select cancers if consumed regularly.

Edible seaweeds can also play a role in weight lose, as they have very low amounts of fats and calories. They also contain alginate, which is known to reduce the absorption of fats by the body. Seaweeds also contains a little fiber and its richness in vanadium and iodine may regulate blood sugar and carbohydrate metabolism.

Even though Edible Seaweeds are loaded with healthy minerals, the high amounts of certain nutrients may create problems for some people. Warfarin users can get affected by the overconsumption of the Vitamin K present in seaweeds. People with kidney problems should be extremely careful about consuming seaweeds as most of them contain high amounts of iodine. And though the iodine in edible seaweeds is beneficial to thyroid patients, consuming it too much can lead to an opposite effect, that is, it can trigger hyperthyroidism.

Edible Seaweeds are mostly grown in Asia, especially in Japan and then exported all over the world. Seaweeds have been eaten daily in countries like Japan, Korea, Vietnam, Philippines, Malaysia and countries along the South Pacific. Edible seaweeds have recently started gaining recognition in the Western countries for their flavor as well as their supreme nutritiousness.

To say it in a few words, Edible Seaweeds are a powerhouse of nutrition and you’d do well to include this healthy food into your diet.

Along with health, seaweeds also benefit the skin and hair. Here are some of the amazing ways Seaweeds are a boon for our skin and hair:

Seaweeds are extremely healthy and adding them to your diet would be a great idea! Seaweeds contain high amounts of protein and minerals.

Seaweeds are rich in various vitamins like Vitamin A and C, which help keep your eyes and joints fit and healthy. Minerals like Iodine, Magnesium, and Calcium are found in large quantities in various seaweeds.

Seaweeds have large amounts of carbohydrates and iodine in them. Therefore, they should be consumed in limited amounts.

The thyroid gland keeps our body fit by releasing hormones that produce energy, help control growth and also repair the damaged cells in our body. The thyroid gland depends on Iodine for making these hormones. Lack of Iodine in our body can lead to weight changes, fatigue and even cause swelling in the neck.

Edible seaweeds absorb high amounts of Iodine from the ocean. Seaweeds can contain up to 1989% of the RDI of Iodine. Thus, consuming them can be supremely beneficial for patients of Thyroid.

Our body has more bacterias in it that human cells. Though half of these bacterias are of the good kind. An imbalance in these good and bad bacterias is what causes sickness.

Fiber promotes gut health, and fortunately for us, Seaweeds are loaded with them. About 25-75% of dry Seaweed’s weight is courtesy to fiber! And what’s more, it is way more than the amount of fiber present in vegetables and fruits.

4. Seaweed is Rich with Antioxidants:

Seaweeds have high amounts of the Vitamins A, C, and E which are known antioxidants. Seaweeds also contain some very beneficial plant compounds. Thus, all of them together make Seaweeds antioxidant-rich food.

The largest number of deaths worldwide are caused by heart diseases. Thus, it is extremely important to keep your heart healthy.

High blood pressure, high cholesterol, being overweight or smoking can be a cause for heart diseases. Seaweeds are believed to reduce cholesterol levels in the blood.

Seaweeds pull out the toxins from our skin, going deeper than most agents do. Thus, seaweed protects the skin from various problems that are caused by the buildup of toxins ion the skin cells. Thus, seaweed is a powerful detoxifier.

Seaweed helps unclog the blocked pores that lead to pimples. Thus, using a seaweed scrub may help you keep those pesky pimples away!

Studies show that Seaweed has hair growth promoting properties that can be beneficial in getting rid of baldness or thinning hair. Consuming seaweeds regularly can help you earn minerals that support healthy hair.

Seaweed helps to regulate the sebum production of the skin. This sebum helps make the skin less oily. A seaweed scrub made by mixing water and seaweed powder can be a good way of treating your skin with seaweed.

Seaweed is rich with minerals and nutrients. Therefore, it deeply nourishes the skin with healing minerals and makes it beautiful and healthy.

Itchy Eczema patches can be soothed by applying seaweed powder over the affected areas. It has moisturizing properties and it is also able to fasten the cell regeneration process.

Seaweed powder, when applied as a mask, helps repair and rejuvenate skin. Seaweed contains niacin, which is believed to brighten the complexion and fade the dark spots.

Seaweed helps keep conditions like Rosacea under control. Seaweed is rich in Vitamin B and also contains anti-inflammatory agents. Therefore, it helps with skin conditions like rosacea and inflammation.

Seaweed is not just helpful for the skin. It can also help keep your hair healthy as it can repair hair that gets damaged because of repeated heat styling.

Consuming seaweed regularly can improve the hydration of the scalp which can in turn help get rid of dry hair. Seaweed also nourishes hair with different minerals, making the hair thicker.

Hair absorbs the fatty acids, minerals, and vitamins from the seaweed. Seaweed helps the hair to rebuild itself and grow stronger. The detoxifying agents of seaweed help remove heavy metals and toxins from the scalp.

Nori is the Japanese name of a seaweed that belongs to the red algae variety. It is mainly used in Japanese dishes, especially in order to roll around Sushi or onigiri. In order to roll it around Sushi and other dishes, Nori is shredded and rack-dried to make sheets in a process similar to that of making paper. These sheets are then sold in stores for cooking purposes.

Raw Nori has 6% protein, 5% carbohydrates and 85% water. Nori is a rich source of Vitamin C, Vitamin A, folate and riboflavin. It is also a good enough source of zinc, niacin, and iron. Nori also contains high amounts of Iodine.

Dulse has many names, including its scientific name Palmaria Palmata, and other names like red dulse, dilsik, creathnach, and sea lettuce flakes. It’s red algae and earlier, it was called Rhodymenia palmata. It is cultivated on the northern edges of the Pacific and Atlantic oceans. It has been an important source of dietary supplements in Iceland for centuries and is also a well-known snack food.

The scientific name of Dabberlocks is Alaria esculenta. It is also called badderlocks or winged kelp. The north coastal people of the Atlantic use Dabberlocks as traditional food. It can be eaten raw or cooked. Mainly, it is eaten in Greenland, Scotland, Iceland, and Ireland.

Gim is an edible seaweed of Korean origin. It is also known as laverbread in Wales and Ireland. Gim is one of the most expansively farmed seaweed in Korea. It is commonly used to make seaweed rice rolls and also as a side dish with certain foods.

Gim has a large amount of protein, riboflavin, Vitamins A, B6, B12, and thiamine. It is also rich in minerals like iron and iodine and amino acids.

Kombu is the edible kelp that is consumed mostly in East Asia. It is also called dasima and haidai. Kombu is eaten in a variety of ways. It can be eaten fresh in Sashimi, picked in vinegar or it can be bought as dried sheets.

Kombu is used extensively in Japanese cooking. Kombu is also used to make a special kind of tea called Kombucha in America.

The scientific name of Ogonori is Gracilaria. It is a species of red algae used as food by humans as well as shellfish. Various species of Onogori are cultivated in South America, Asia, Oceania, and Africa.

Wakame is a type of edible algae. It has a distinct, strong and subtly sweet flavor and texture. It is mostly served in soups and salads. Studies show that Wakame helps burn off fatty tissues. It is also used in beauty treatments. It has also been used in oriental medicines for intestine strength and blood purification.

Hijiki grows on the rocky coastlines of Korea, Japan, and China. It is a brown alga and has been a part of the Japanese cooking for centuries. Hijiki is rich in minerals such as calcium, iron, and magnesium.

The Japanese folklore says that Hijiki benefits health and beauty. It is also believed that regular consumption of Hijiki results in lustrous, black hair.

Seaweeds are, quite simply, a goldmine of nutrition. They can help you maintain your overall health better than any other food. Seaweed helps maintain your body, skin as well as hair health.

The only thing you need to remember is to consult your physician before you start using any seaweed supplement. Eating seaweed on a regular basis is good, but make sure you don’t over-consume it, because the high amounts of iodine and carbohydrates may prove more harmful than beneficial if taken more than in limited amounts.

Is Dried Seaweed Good For you?

Dried algae and seaweeds are tested and process food stuff if purchased from the super market or online store.

Don’t Overtake in The Beginning

Do not over intake, if you are eating it for the first time. You should slowly increase seaweed intake because your body is not accustomed to this type organic and rich nutrition food stuff. Try all types of seaweeds available like red seaweed, green seaweed, blue seaweed, and mixed seaweed also called Kaiso Seaweed. Most common ones are wakame, nori sheets, hijiki, and kelp that are very frequently at Japanese and Korean restaurants.

Wakame is used to make the salad and added to soups. Nori sheets to wrap sushi rolls, and nigiri. Kelp is mostly used to prepare stock that can be used in many food-preparations like soups, salads, and Don Buri ( rice bowl ).

In case you are not fit and have taken seaweed before. Please consult your doctor before you purchase it. However, there are few ready-made seaweed snacks that you can consider to start with. These snacks are available in many flavors like dried fruit flavor, spicy, plain, and crunchy texture.

Is Dried Seaweed Good For you?

Dried algae and seaweeds are tested and process food stuff if purchased from the super market or online store. Do not over intake, if you are eating it for the first time.