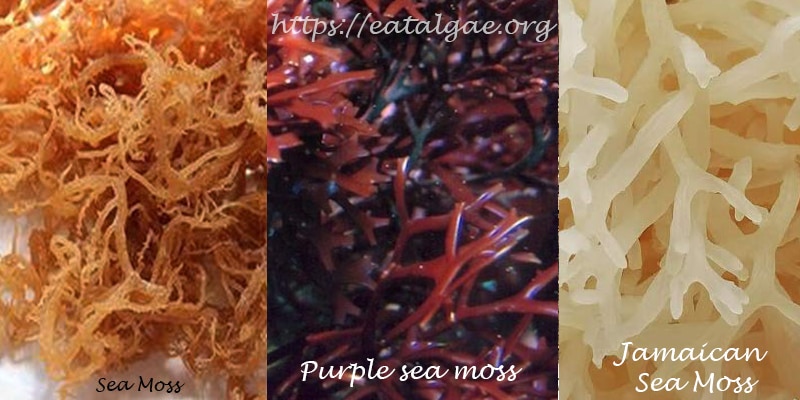 Sea moss is a kind of red algae found in the Atlantic coasts, Europe, the Caribbean Islands, and other parts of North America. Being a rich source of minerals, trace minerals, and vitamins, sea moss has been a part of the human diet for many decades. In this post, we will discuss the numerous health benefits you can acquire by including it in your diet.

Sea Moss is tasteless; so, when it comes to including sea moss in day to day diet it becomes a versatile ingredient that can added to soups, salads, drinks, tea, smoothies, gel and can be easily infused with other fruits juice, shake, and gel.

Say goodbye to your acnes and ugly marks on your face with the natural sea moss. Other than putting it on your face and skin, you can also consume it orally in the form of a smoothie blend. Sea moss is a rich source of minerals and trace minerals that are good for all types of skin (oily and dry) and thus it effectively removes acne from your face and gives you healthy and shining look.

Recent researches suggest that a new collection of compounds found in sea moss efficaciously activates the HIV reservoirs. This is a new milestone in the treatment of HIV, which is currently seen as something nearly impossible to eliminate. Sea moss is giving new hopes to medical researches and developments.

The benefits of sea moss for hair are more than what you might have expected. Sea moss can be used for the deep nourishment and strengthening of hair. It soothes the scalp and fortifies the hair fibers. Sea moss gel is widely applied as a hair conditioner because of its power to eliminate the effects of dandruff from the hair and bring moisture and smoothness to hair. The iron, Vitamin A, E, D, and B-vitamins highly promotes hair growth.

According to Dr David Jack, sea moss is a kind of skincare powerhouse. It is believed that the antibacterial, antimicrobial and antiviral functions of sea moss help in balancing the skin microbiome. The rich presence of Sulphur reduces the excessive production of oil (sebum) in the skin. Sea moss is an incredible source of vitamins and minerals including calcium, potassium, vitamin A, vitamin K and many others. The presence of all these ingredients helps in reducing wrinkles and fine lines and protects from harmful environmental elements.

Sea moss is found to help in reducing the appetite. This is because of the ability of sea moss to absorb moisture and thereby increase its volume. This bulky material will fill the intestinal tract and give you the feeling of fullness causing less eating yet keep you healthy. Furthermore, sea moss contains the compound called citrulline-arginine. The compound accelerates the metabolism which can help you to reduce the weight.

The antibacterial and antimicrobial agents present in sea moss dissolve mucus from your body and makes your brain and mind clear. It has been used as a medicine for coughs and several other respiratory diseases for thousands of years and is a secured ingredient.

Possessing low immunity makes you more vulnerable to diseases. Packed with 90+ minerals and a host of vitamins, sea moss should become your go-to-meal. It is magnificent support to your immune system and overall health. It is rich in amino acids, antioxidants, vitamin C, and so many antiviral and antibacterial agents. All these nutrients keep you away from infections and also help you to fight with them and stay healthy.

Sea moss is highly used to treat eczema and several other skin diseases. It is a must-to-go ingredient in many homemade lotions and beauty products for the smoothing and nourishment of the skin.

Various researches say that consuming sea moss as a smoothie or intaking supplements can boost your fertility. Sea moss is a good source for fiber, and nutrients like potassium, calcium, and magnesium. All the nutrients nourish breast milk and support the healthy production of amniotic fluid. Also, the presence of iodine level contributes to the thyroid issues which will favor the health of reproductive organs and smooth pregnancy.

According to the researches organized by food scientists at Teagasc and the Authority of Agriculture and Food Development in Ireland, sea moss can reduce blood pressure levels. The presence of amino acids which are the building blocks of peptides and proteins and potassium regulates the blood pressure efficiently. The members of the research group also found that certain protein in the sea moss curbs the action of renin, which is known for increasing the blood pressure.

Sea moss is considered as a healthy food product. However excess take of sea moss can harm the kidneys. So, before consuming, it is always advisable to consult a doctor.

Are you a person who is so interested in bodybuilding? Then you must include sea moss in your regular diet. Rich in so many minerals and vitamins, sea moss is an ideal ingredient for your diet. It comprises a lot of health benefits and can help you in developing a sturdy body-both for males and females. Sea moss is well packed with zinc, magnesium, potassium, sodium, and iron. All these minerals can contribute to developing your body.

It is conceived that sea moss which is grown in the rocks of oceans may contain a certain chemical that is capable enough to target cancer. Compounds ranging from bryozoans and many others found in coral reefs have been used by scientists for more than two decades. Using the minerals and substances found in sea moss, scientists are designing treatments to subdue cancerous cells in the human body.

The thyroid is an important organ in regulating hormone levels. Sea moss is filled with iodine compounds and can effectively support thyroid function and keep it healthy. Without sufficient iodine levels, your body can’t make thyroid hormones. The presence of DI- Iodothyronine is used to cure thyroid disorders. It is also full of Thyroxin (T4) and Tri-iodothyronine (T3).

If you are someone, desperately looking for a source of collagen, sea moss is the right one. Sea moss is an active part of the famous Doctor Sebi diet. Comparing to the baked seaweed sea moss, the natural unprocessed one is rich in nutritional value. Irish sea moss which has been dried in a natural manner that carries the natural sea salt is the best. The gelatinous form of sea moss is an ideal source for collagens.

Cold and cough is an inevitable part of seasonal changes and it is time to get a quick remedy. Treating yourself with sea moss is a great way to cure colds, cough, and even sore throats. The tradition of using sea moss for health and medicinal benefits continues till today in many cultures and you can definitely try this with zero side effects. Consume it in the form of a syrup. Don’t worry, you can sweeten it using honey or add a different flavors with lemon.

Congestion is not a very serious health issue in its initial stage but it can make the daily activities very frustrating. This includes sleeping as well. Sea moss or Irish moss is one of nature’s best food products with immense benefits. It is jam-packed with potassium chloride that helps to dissolve catarrhs causing congestion.

In Conclusion, there are numerous health benefits of sea moss. The antiviral and antimicrobial agents present in the sea moss further assist the body in getting rid of infections. Sea moss must be bought from reliable sources though.

2 thoughts on “What is Sea Moss Good For?”