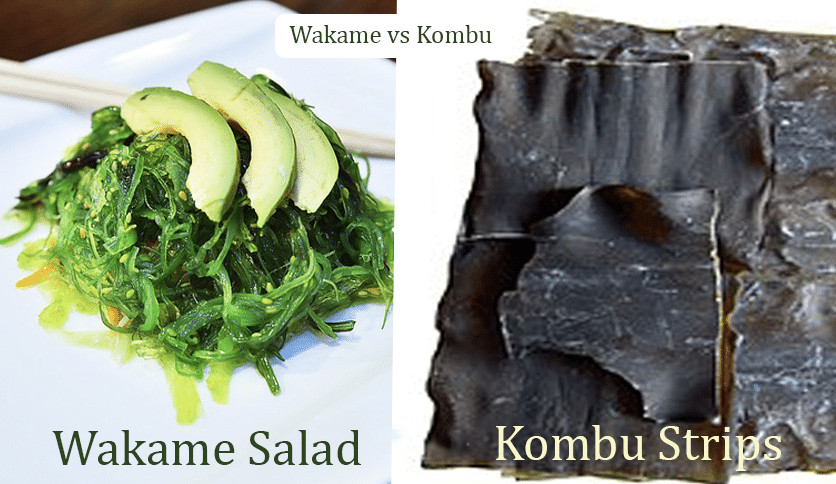 Wakame and kombu are very common edible seaweeds/algae  from the brown algae family, both have been served in Asian countries for centuries and recently people have started experimenting with these seaweeds all over the world. The main difference between wakame and kombu is how they are used in the kitchen. In Japanese cuisine, Kombu is used as a base to prepare stock/broth that is added to other vegetable, meat and noodle dishes as a base. Where as wakame is soaked and added to salads, soups and sometimes omelettes.

Both Wakame and Kombu are easily available at nearby Asian Supermarkets or Japanese section, online stores like Amazon, Ebay, and specialty stores.

Kombu species is from the brown algae family, it is harvested mainly in Japan by the sea farmers, aged, processed and exported to the world. Kombu is a must-have ingredient at Japanese restaurants, Japanese kitchen and Sushi Bar.

The other countries that have also recently started exporting Kombu and Wakame are – China and Thailand.

Kombu is a long strip that has two layers, you can open it like an envelope, and the aged Kombu is considered to be superior, the price of kombu is determined by its age; the older the the nutritious. Kombu is kept away from light and moisture so it can last for several years.

After 12 months, Kombu becomes superior, it can be regrown with its top of the leaf portion, while the root of Kombu is not used.

Kambu is a rich source of dietary minerals.

How to prepare (Dashi) Kombu Stock/Broth

Kombu washed and put in a building pot and covered with water and then kombu is simmered over low fire for 4-5 hours, it is not boiled.

Let it rest for few hours till it becomes normal. Now, you can strain and keep it in a pot and use whenever required.

This is readymade premium kombu Dashi powder that can be added to soups, onigiri, sushi, temaki, vegetables, gravy and meat.

What is Wakame Seaweed?

Wakame is most often used in seaweed salad and soup filling. Wakame is often served with a small side salad dressed with rice vinegar and soy sauce. Or it is used in a Japanese marinated cucumber side salad called sunomono. It adds a delicious component to a variety of meals, but recently it has gained popularity because of its health benefits.

Wakame contains vital vitamins and minerals including iodine, calcium, iron, and magnesium. It is also rich in folate, vitamin A, vitamin C, vitamin D, vitamin E, vitamin K, and vitamin B2. Wakame also has lignans and fucoxanthin, which have their own unique health benefits.

Vitamin A is good for eye sight, Vitamin C boosts immunity, vitamin E for hair, iodine for thyroid function, calcium for bones and tooth, and iron is essential to pregnant women.